On 2 September 2021, the Natural Resources Institute Finland (Luke) published an interim report on the work to determine the favourable conservation status of wolves. The Finnish Hunters' Association requests that the Ministry of Agriculture and Forestry prepare a proposal on initiating population control hunting as announced by Minister Leppä. Skip to main content

On 2 September 2021, the Natural Resources Institute Finland (Luke) published an interim report on the work to determine the favourable conservation status of wolves. The Finnish Hunters' Association requests that the Ministry of Agriculture and Forestry prepare a proposal on initiating population control hunting as announced by Minister Leppä.

In the preliminary debate on the citizens' initiative regarding wolf population control, which took place on 18 November 2020, Minister Leppä stated the following in Parliament: ‘The key to this matter is to define a favourable conservation status, which is practice is a threshold value above which the wolf population can be controlled by hunting. That is why I have given the Natural Resources Institute Finland the task of defining that threshold value, giving us access to this information as soon as possible and at the latest by the end of the summer.’

Tuomas Hallenberg, Chairman of the Finnish Hunters' Association, says: ‘The interim report from Luke has now been received, and earlier this summer, the Ministry's working group completed its work on the implementation methods for population control hunting. Now, as previously announced, we look forward to a proposal on population control hunting.’

Only in Finland are wolves not yet hunted

Wolves are being hunted in all the countries around Finland, while in Finland itself no decisions have yet been made on wolf hunting.

Norway has a population of over 100 wolves, and dozens of wolves have been hunted. In Sweden, an EU country, the favourable conservation status for wolves is 300, equal to 30 wolf packs, and population control hunting of wolves has begun. In the Baltic countries of the European Union, hundreds of wolves are hunted every year. In Russian Karelia, bounties are paid out for killing wolves. With the birth of more wolf cubs this year, the wolf population in Finland may have reached 500 this summer. We’re still waiting for the decisions.

The association studied the interim report and noted that the figures presented in the preliminary review seem to be surprisingly high compared to those for Sweden and Norway.

Last autumn, a citizens' initiative for the commencement of hunting for wolf population control was put together in record time and then delivered to Parliament. In the preliminary debate, the initiation of hunting was viewed as a matter of urgency. Several municipalities and cities have recently appealed to the Ministry of Agriculture and Forestry to initiate hunting of wolves. These societal needs must now be taken into account.

The Finnish Hunters' Association has encouraged hunters to make observations of wolves. Hunters also achieved a record-breaking collection of DNA samples, which led to a one-third increase in population estimates. The objective in this has been effective and transparent cooperation between different actors: ‘We should be seeking as a whole nation to make progress in this matter. For hunters, it is important that each body handles its own area of responsibility,’ concludes Finnish Hunters' Association Chairman Tuomas Hallenberg. 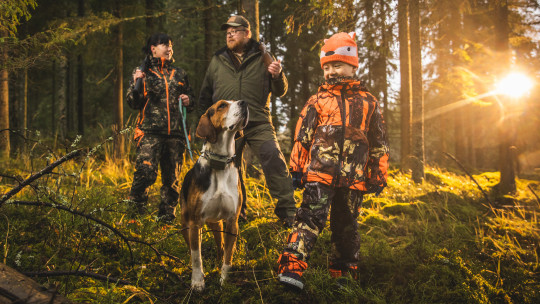